Eight incredibly talented visual artists, each with their unique sense and style of graphic storytelling, have housed themselves together in a collective called Kadak.

The eight South Asian women—Aarthi Parthasarathy, Janine Shroff, Akhila Krishnan, Mira Malhotra, Pavithra Dikshit, Garima Gupta, Kaveri Gopalakrishnan, and Aindri Chakraborty—have come together to showcase their art at this year’s East London Comic Arts Festival (E.L.C.A.F.). Of course, we are pretty sure that they will continue joining forces to give us many interesting narratives and perspectives in the future.

We spoke to them in an email conversation about this future, the beginning, the matchbox that inspired them, and about leaving the boys out. Read on for excerpts: 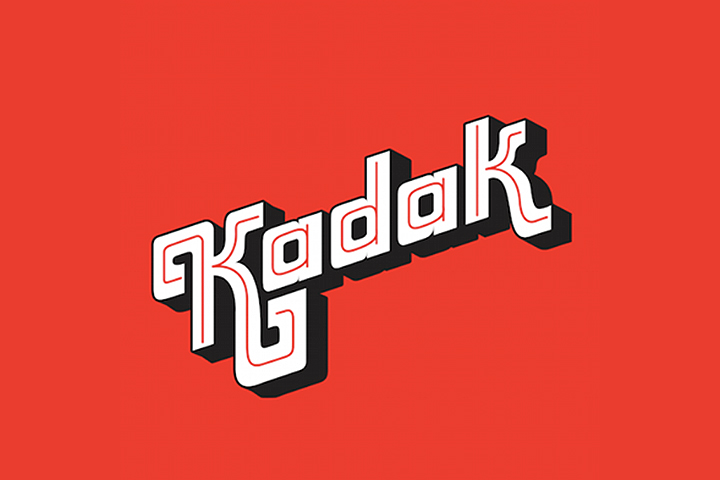 Where did the initial idea of forming a collective come from?

The driving force behind Kadak has been the East London Comic Arts Festival's submission call for this year’s edition that is happening in June.

All of us have known each other, and have been following and admiring each other's work for a while now. Recently, we've all been discussing the possibilities of collaboration. When the E.L.C.A.F. call happened, we all finally decided to get together to send in our application.

The name Kadak was gloriously displayed on a box of Supreme Matches in Aarthi's possession at the time. That matchbox has been our mascot, muse, and mucilage in this journey.

And why does this collective only have women?

In one of our early email exchanges, Janine was lamenting at the lack of women nominees in this year's Angoulême Comics Festival in France. There has also been much ink spilt about the lack of diversity in the comics sector. Kadak hopes to be a response to that.

We feel that women's stories, especially from the subcontinent, need to be told and heard. The years of erasure have to somehow be addressed/ redressed. 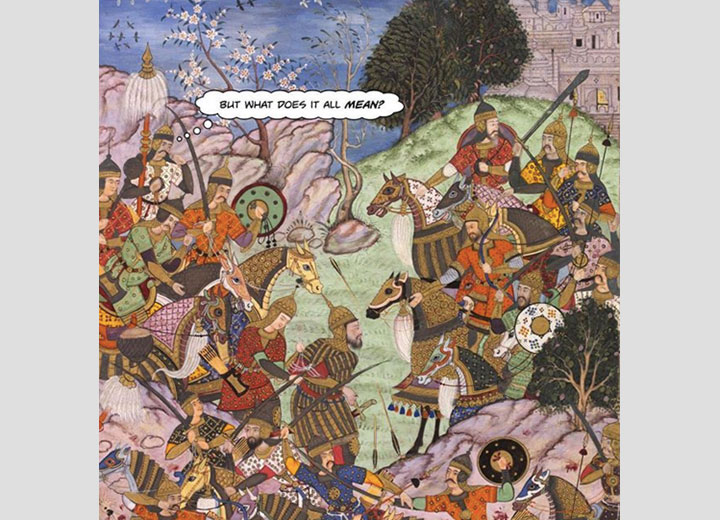 From Royal Existentials by Aarthi Parthasarathy. Image courtesy of the Kadak Collective.

What are some of the things that bind the eight of you together?

As Mira succinctly puts it, Kadak mainly means we have views that are strong. Our work is very diverse and different, but our concerns are the same.

Among us we have, Kaveri's comic about female safe spaces in Invisible Borders for the Drawing the Line anthology (currently being exhibited at Comix Creatrix: 100 Women Making Comics, London), Aarthi's Royal Existentials which looks at political and social angst using Indian historical imagery, Janine's satirical take on our obsession with female fertility in The Queen, and Aindri's comic journalism piece on menstrual cups in My Green Period.

Then we have Garima's documentation of the Khada Parsi in Project Bambai, Mira's celebration of Indian women and their daily lives through her creative practice at Studio Kohl, Pavithra's collage explorations with salads, a relatively new addition to South Asian food culture as a critique of our attitude to food consumption, and Akhila's story of a mother and her deceased child in A Familar Stranger for Gaysi, exploring the lives we sometimes keep hidden from those we love the most—a common situation in the sexual and personal lives of many young people in India today.

Could you tell us about your plans at E.L.C.A.F.?

E.L.C.A.F. is an annual London based festival celebrating all things related to comics, graphic novels, sequential art, illustration, and storytelling. Founded by Nobrow in 2012, E.L.C.A.F. seeks to create a celebration of emerging talent, and the dynamic community of individual artists and collectives that are pushing the boundaries in comics, small press publishing, and narrative illustration.

We are planning to sell illustration prints, zines, pop-up toys, and postcards at E.L.C.A.F. this year. We are documenting that journey, from process to finished prints, on our Facebook page. 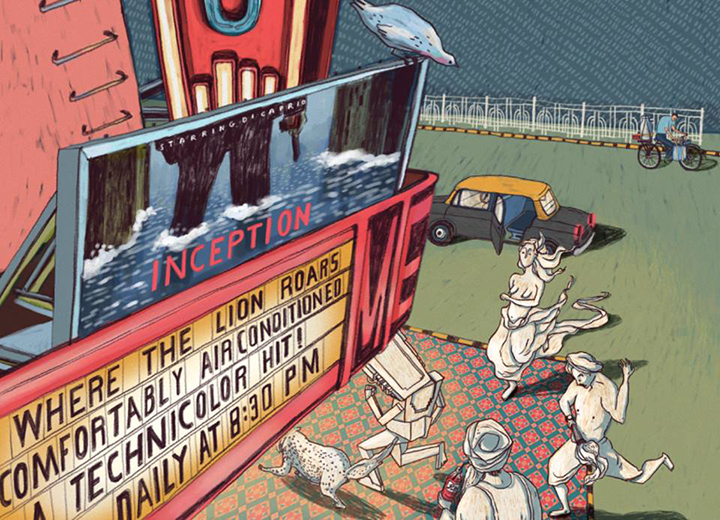 A commissioned art print about Metro Cinema by Garima Gupta. Image courtesy of the Kadak Collective.

Post-E.L.C.A.F., what do you all hope to achieve through Kadak?

The enthusiasm and collaboration to get Kadak going has been very encouraging. At present, we are focusing on our table at E.L.C.A.F., and looking forward to sharing our work with some of the most innovative illustrators and comics storytellers who will be exhibiting there.

Payal is an independent journalist and editor of The Floating Magazine.

Was it good for you?